COVID-19 and its implications for South Africa's democracy

The COVID-19 epidemic has exposed the limitations of South Africa’s democracy. Very little has been achieved to address the critical issue of racialized poverty in the country. A new approach to tackle this enduring problem is needed, writes Lungisile Ntsebeza. At the heart of it all is the failure of the democratic state to resolve the land question in South Africa.

South Africa and indeed the world will in many ways not be the same again following the outbreak of the COVID-19 epidemic which was initially announced in China in December 2019. Three months later, the World Health Organisation (WHO) declared the coronavirus pandemic on 11 March 2020. The pandemic had spread like prairie fire across the globe bringing social life to an almost standstill.

Measures taken
Within days of the WHO declaration, the South African Minister of Co-operative Governance and Traditional Affairs, Dr Nkosazana Dlamini-Zuma announced on 15 March 2020 a national state of disaster. This was formally communicated by the President of South Africa, Mr Cyril Ramaphosa. The main aim was to combat the spread of the coronavirus. Measures that were introduced at the time included travel restrictions on people coming from countries mostly affected by the virus, as well as limiting the size of meetings to, in many instances, not more than 100 people. 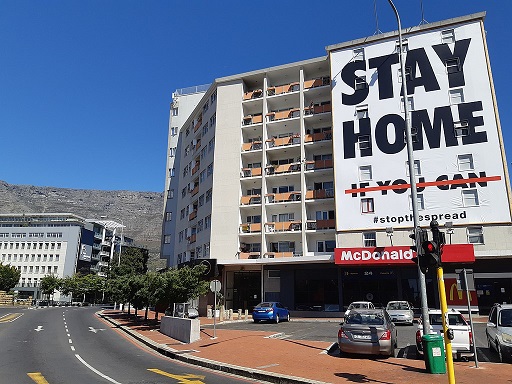 All stay home
More drastic actions were taken when President Ramaphosa imposed on 23 March 2020 a 21-day lockdown that would start on 27 March 2020. There was realisation at the time that the pandemic was spreading world-wide at such a pace that stern measures were called for. This, among others, is what the President told the nation: From midnight on Thursday, March 26 until midnight on Thursday, April 16, all South Africans will have to stay at home.
He went on to announce that all shops and businesses would close, excluding supermarkets, pharmacies, laboratories, banks, petrol stations, healthcare providers, emergency and security services. Only people working in the above industries would be allowed to leave home, and only for work related purposes.
A National Command Council, chaired by the President, as well as an Inter-Ministerial Committee chaired by the Minister of Health, Dr Zweli Mkhize, were set up. According to the President, the Command Council would meet three times a week.

‘Ruthlessly efficient fight’
The seriousness with which the President and his team took the crisis as well as their performance is best captured by Andrew Harding, the Africa Correspondent of BBC News in an article published on 3 April 2020, a week after the declaration, with the telling headline “South Africa’s ruthlessly efficient fight against coronavirus”. Harding applauded South Africa for having dealt with the epidemic “more efficiently and more ruthlessly than many other countries around the world”. The leadership displayed by President Ramaphosa and Minister of Health Mkhize was described as “formidable” and Mkhize’s daily briefings as “sober” and “deeply knowledgeable”. The tough measures referred to included physical/social distancing, urging citizens to stay at and work from home, quarantine for those diagnosed as positive, citizens to wash hands often, and the establishment of test centres/units to facilitate mass testing.

Minister of Health a medical doctor
Although Harding mentioned problems here and there, his overall assessment was very optimistic and positive. It would be hard to find reason to doubt the dedication of especially the Minister of Health to his task and the research he does prior to giving his briefings. He sees his task as that of an army general in a war-situation, a situation he would not be unfamiliar with, given his struggle credentials. His other advantage is that he is himself a trained medical doctor. However, there are serious challenges confronting South Africa that are worth highlighting and that can undermine the achievement and efforts made.

Most unequal society in the world
There is little doubt that this epidemic has in a dramatic fashion exposed the severe limits of the South African democratic project that the ANC-dominated government has embarked upon since 1994. The pandemic has brought to the fore principally dire and vast inequalities that are a feature of post-1994 South Africa. The country has earned for itself the dubious distinction of being the most unequal society in the world. A 2018 World Bank report, for example, estimated that the richest 10 percent of South Africa’s population own 71 percent of the country’s wealth, while 60 percent of the population, the poorest, own a mere seven (7) percent of the wealth. The picture was undoubtedly worse at the time of the outbreak of the virus, given that South Africa was in a recession and had an alarming unemployment rate that was officially recorded at close to 30 percent.

Appalling conditions
Most of the poor in South Africa live in informal settlements in the cities and small towns, where conditions are appalling and characterised by overcrowding, lack of access to clean water and poor sanitation. An organisation of Shack Dwellers, Abahlali BaseMjondolo, boasting a membership of about 70,000 people, reports that an average room in the informal settlements “has no water, no toilet and no refrigeration”. Most live a hand to mouth existence and do not have the luxury of savings in financial institutions.
The rest of the poor can be found in the former bantustans. Overcrowding may not be an issue in these areas, but the main problem is lack of job opportunities and access to land that people can use to make a living by growing crops and breeding livestock. Lack of delivery of basic services, particularly water and maintenance of infrastructure is a key problem that characterises these areas. On commercial farms, farm workers live in appalling conditions, continue to be exploited by farmers and forever face evictions without any guarantee of alternative land. 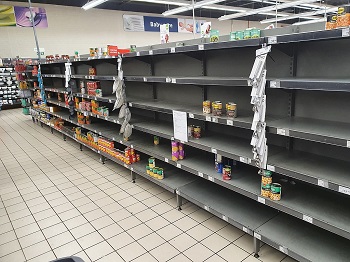 Against the above backdrop of conditions in the informal settlements and the countryside, it becomes clear that very few of the measures that have been proposed to combat the epidemic are practicable. As some observers and leaders of Abahlali baseMjondolo have averred, the measures to combat the virus favour the middle class and well-to-do South Africans. The measures assumed that all South Africans live in conditions where they can maintain a physical distance from each other, have a home to stay in, have work and can generate income working from home, have water and money to buy soap and/or sanitizers. This unfortunately is not the case, particularly, though not exclusively, with the shackdwellers. Their reality is that the majority are unemployed and constantly look-out for casual jobs. Some are self-employed and cannot earn money by staying at home. In the former bantustans shortage of clean water makes it impossible to maintain the hygiene standards demanded by the lockdown measures.

Vendors can apply for a permit
Given the above constraints, government has had to make concessions, the ramifications of which are difficult to contemplate. It is as if government is caught between the rock and a hard place. For example, on the question of people such as vendors, who are self-employed and cannot work from home and earn an income; government has allowed such people to apply for permits to do their business. This has the potential of opening up flood gates for all sorts of transgressions that may be difficult to control in the medium-to-long term, should the epidemic persist. At the same time, it is impossible for government to force people who do not have access to food to stay inside overcrowded shacks.

Room for corruption
Government is also making desperate efforts to ensure that there is provision of water, especially given that the availability of water is critical in the government strategy of combatting the virus. The key challenge facing government is that municipalities whose responsibility it is to deliver these services have a tainted track record. Not only are there human capacity problems, but administrators and councilors are known to marginalize citizens who could complement capacity shortfalls so as to create room for corruption in the form of kickbacks and cadre deployment.

The land question
As pointed out at the outset, the coronavirus epidemic has exposed the limitations of South Africa’s democracy. Very little has been achieved to address the critical issue of racialized poverty in South Africa. A new approach to tackle this enduring problem is needed. At the heart of it all is the failure of the democratic state to resolve the land question in South Africa. In many ways, the colonial and apartheid past, with its racialized legacy of poverty and inequalities, prevails. Very little has been done to dismantle the former reserves/bantustans, which were central to the colonial and apartheid strategy of divide and rule. The artificial divide between rural and urban has been maintained and the land question has been relegated to an issue that concerns rural areas and agriculture. Land questions in urban areas are reduced to housing.
Yet, land and housing are inseparable, as so-called service delivery protests often show. The housing crisis in urban areas cannot be adequately understood without linking it with land hunger and land shortage in rural areas. There is evidence in abundance of the steady movement of people from the countryside to cities. This goes back to the colonial and apartheid eras. Research shows that African producers were actively prevented from making a living out of land through legislation, such as the notorious Natives Land Act of 1913 and the Land Acts of 1936, thus forcing them to seek work in the cities and mines.

Involve social movements
My argument is that to fix the above distortions, which have been brought to the fore by the current pandemic, a comprehensive approach to the land question is needed. Unlike the state-driven approaches of the past, which have failed, social movements representing the range of marginalised South Africans highlighted in this piece, would have to be involved. This will ensure that those who are at the receiving end will be directly involved in constructing their futures.

This article was originally published on the University of Leiden's website. Please see link below for the original article.